CARMEL, Ind. — Keegan Connor, 14, has turned her love for dogs and her recent scoliosis diagnosis into a campaign to help others.

“When I was having a rough time in the hospital (the therapy dogs) could be at my bedside and I could just get away from where I was. They come around every once in a while but even that one minute or five minutes or ten minutes made everything so much better,” Connor said.

In a video of her December hospital stay for spinal surgery, Connor’s mom can be heard asking if petting the dog helps make everything better. Connor’s face lights up as she hears her mom’s question. She smiled and nodded, but seeing her healed now, it’s clear she was in a lot of pain.

“I was about 13 and I was actually diagnosed with scoliosis. And I got this new surgery called VBT, Vertebrael Body Tethering, and therapy dogs actually helped me recover,” said Connor. 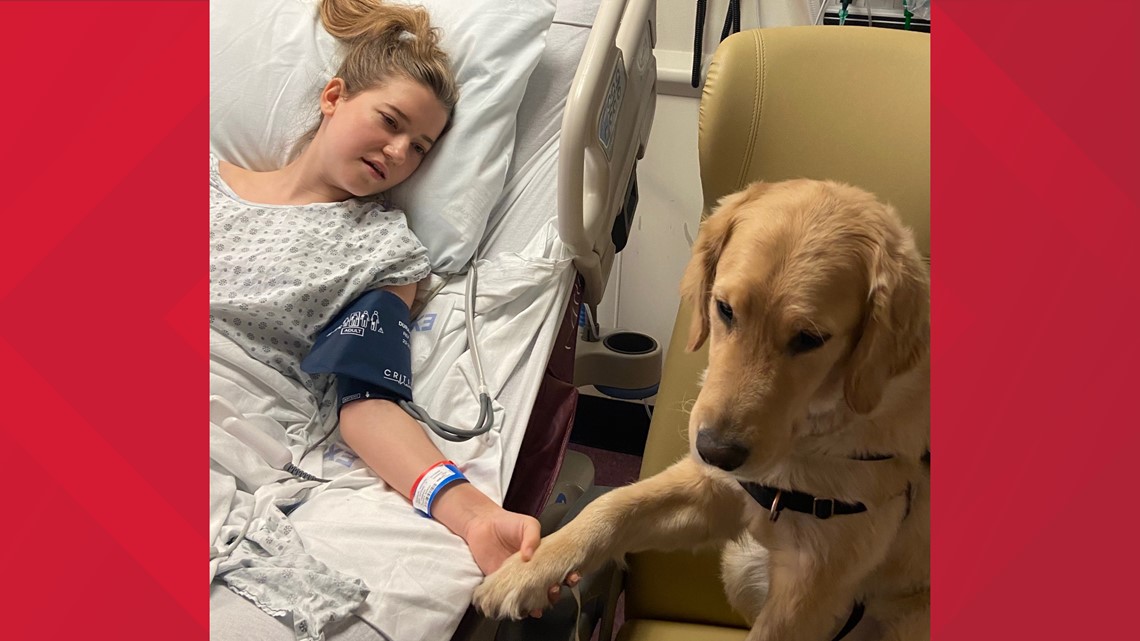 Credit: Keegan Cares
Keegan Connor with a therapy dog after her surgery.

Connor received a late diagnosis, but said luck was on her side.

Connor said doctors told her VBT has to be done while a patient is still growing. At 13, she was nearing the end of the last cusp of her growth spurt.

“My scoliosis wasn’t caught early. It was caught just in time so that I could get the surgery, and so I want others to be aware so that they can get it checked,” said Connor.

Connor loves dance. She does ballet, tap and jazz. As an avid dancer, singer and songwriter with aspirations for Broadway, qualifying for VBT meant she could continue to maintain her quality of life while continuing to pursue her dreams for one of the biggest stages in the world.

“(VBT) basically allows me to keep all my flexibility, because it’s like a rope instead of the two rods (used in spinal fusion surgery), so I can dance and do all the things I want to do,” said Connor, smiling.

Connor doesn’t take her luck for granted and she wanted to do whatever she could to help raise awareness about scoliosis and prevent late diagnoses, so she launched the non-profit Keegan Cares. 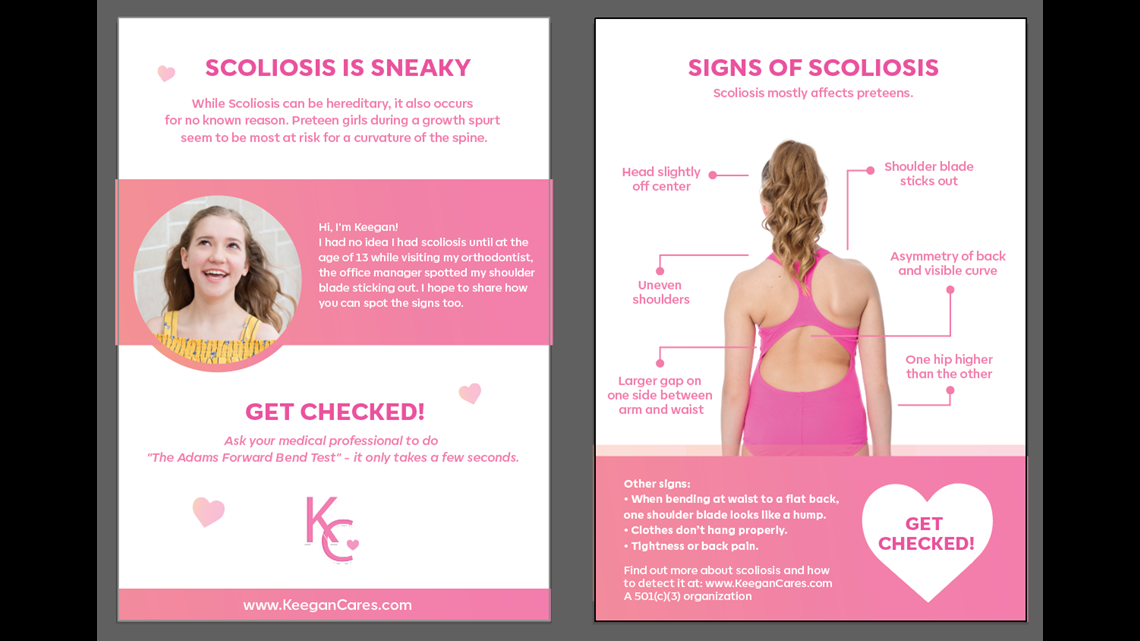 “I was just thinking if I’ve gone through this, I know many other people have as well and I want them to catch the signs earlier,” said Connor. “I try my best to speak to groups. I have a flyer so you can know what to spot, and I sell bandanas that I call “care-danas” and the proceeds go back to Paws and Think, which is a therapy dog program.”

But that’s not the only way Connor gives back. She’s also a Paws and Think volunteer.

“Some of the things I do to help register therapy dogs is I’ll be their distraction, so I’ll run around to try and teach them how to behave in different circumstances. And I also participate in the dog reading program, where kids can read with dogs and not be so anxious,” said Connor. 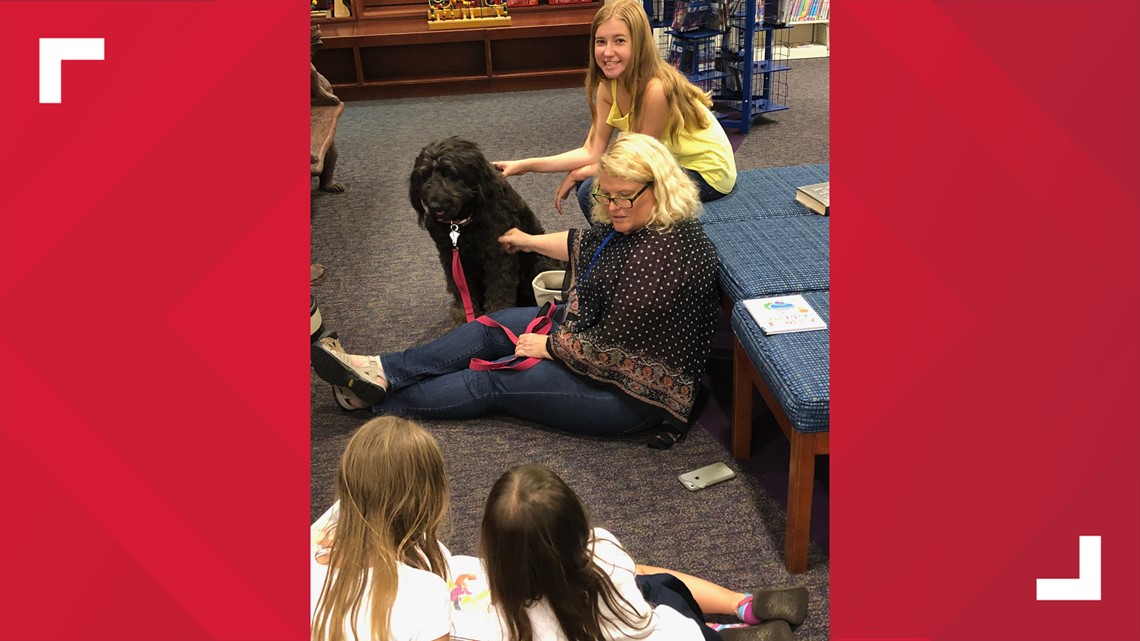 Credit: Keegan Cares
Keegan Connor helping with the dog reading program where kids can read with dogs and not be so anxious.

Keegan also sells t-shirts and sweatshirts. A portion of the proceeds for her bandanas and apparel sales go to Paws and Think.

Connor said she designed all the bandanas, which feature cheeky phrases on them like “I still live with my parents,” or “think pawsitive.” 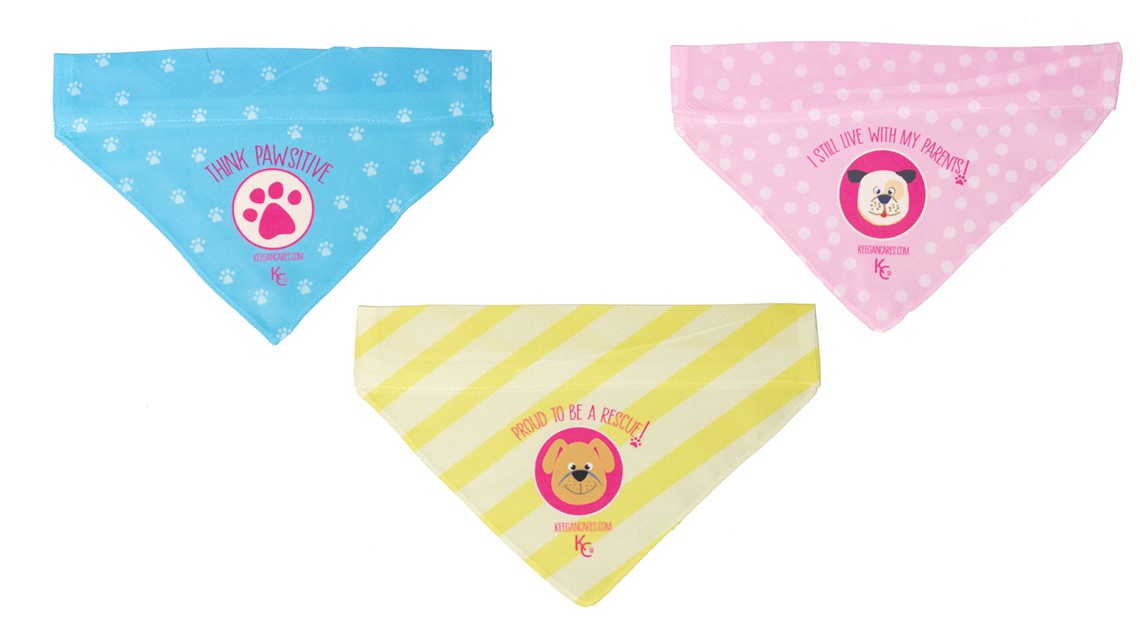 Credit: Keegan Cares
Keegan Connor designed bandanas which feature cheeky phrases on them like: “I still live with my parents” or “Think Pawsitive.”

Click here to support Keegan Cares and/or her fundraiser for Paws and Think.